Eight is great for Canada 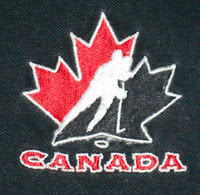 It seems all Canada does at the Ivan Hlinka Memorial Cup is win gold.
On Saturday, Canada captured gold for the eighth straight year at the annual summer under-18 tournament held in the Czech Republic. In the championship final, Canada dumped Sweden 7-3 at the Alcaplast Arena in Breclav in the Czech Republic.
Pierre-Luc Dubois, who play for Cape Breton of the Quebec Major Junior Hockey League, led the way for Canada with a pair of goals and an assist. The red and white received singles from Michael McLeod, Tyler Benson, Tanner Kaspick, Jordan Kyrou and Beck Malenstyn. Netminder Dylan Wells made 15 stops to pick up the win in goal for Canada.
Jesper Bratt, William Fallstrom and Alexander Nylander replied with singles for Sweden. Filip Gustavsson stopped 10-of-14 shots starting in goal for Sweden before being pulled after Canada went ahead 4-0 at the 16:54 of the first. Isak Wallin turned away 18-of-21 shots playing the rest of the way in relief.
Canada was a perfect 7-0 at the Ivan Hlinka tourney guided by head coach Stan Butler and assistant coaches Shaun Clouston and Darren Rumble. The bench bosses guided an impressive collection of young talent, who should be fun to watch for years to come.

Shirley makes waves at under-18 camp

Saskatoon product Sophie Shirley was hoping to leave a positive impression with the Hockey Canada brass.
The 16-year-old forward was in Calgary taking part in the selection camp for Canada’s under-18 women’s team, which wrapped up on Saturday. Shirley is the fifth youngest player among the 42 invites looking to crack a spot on the 23-player squad that will travel to Lake Placid, N.Y., for a three-game series against the United States’s under-18 squad from Aug. 20-23.
Shirley had a goal and two assists in four camp exhibition games playing for Team White. She is listed as now standing 5-foot-8 in height, which means she has grown four inches over the summer since last playing for the Saskatoon Stars girls’ midget AAA team.
As a 15-year-old sophomore last season with the Stars, Shirley had a spectacular campaign. She netted 22 goals and 17 assists helping the Stars post a 25-3 regular season record to allow Saskatoon to finish first in the Saskatchewan Female Midget AAA Hockey League.
Shirley was named the most valuable player of the SFMAAAHL and proceeded to pick up 12 goals and 12 assists in nine games, as the Stars won their first league title. At the Esso Cup national championship tournament held in April in Red Deer, Shirley was named the event’s MVP, and she led the tourney in scoring potting nine goals and seven assists.
As Shirley is one of a handful of 16-year-olds at Canada’s under-18 camp, she is gaining valuable experience being on Hockey Canada’s radar. If she doesn’t make the under-18 team this year, she will more than likely be a big prospect for the team next year.

If you have any comments about this blog post, feel free to email them to stankssports@gmail.com.
Posted by Darren Steinke at 19:06