The Saskatoon Stars kicked things back into high gear before heading into an extended break.
On Saturday and Sunday, the Stars convincingly swept a two-game series against the visiting Melville Prairie Fire taking the encounters by respective scores of 6-2 and 8-0 at the Agriplace Arena.     The victories were big bounce back efforts for the defending Saskatchewan Female Midget AAA Hockey League champs, who dropped a 3-2 decision at home to the Prince Albert A & W Bears back on Jan. 24 in their last outing before facing Melville.
The sweep allowed Saskatoon to improve to 22-4 and move into a position to be on the cusp of locking up first place in the SFMAAAHL and home ice advantage throughout the league’s post-season. The Stars conclude the regular season by traveling to Battleford to play the Sharks (3-18-2) on Feb. 20 and 21, and would clinch first by winning just one of those two contests.
The Stars will know if they need to earn any wins at all in order to secure stop spot in the league before they hit the ice on Feb. 20. Only the Swift Current Diamond Energy Wildcats (15-5-2) could finish ahead of the Stars in the league standings, but the Wildcats need to win all of their final six games in regulation to have a chance at that distinction.
Swift Current will have finished its regular season schedule before the Stars hit the ice on Feb. 20. The Wildcats do complete their regular season schedule on Feb. 20, but their home encounter that day against the Weyburn Southern Range Gold Wings starts six hours and 45 minutes before the Stars game does.
The SFMAAAHL awards three points in the standings for a regulation win, two points for an extra time win and one point for an extra time loss. Saskatoon has 64 points coming from 20 regulation wins and two extra time victories.
Swift Current has 47 points with all their wins coming in regulation along with two points from extra time setbacks. If the Wildcats won their remaining six games in regulation, they would finish with 65 points in the standings.
Mackenna Parker and Danielle Girolami had big nights in Saturday’s 6-2 victory over Melville. Parker had a pair of goals and an assist, while Girolami had three assists.
Grace Shirley, Julia Rongve, Joelle Fiala and Kianna Dietz had singles. Emma Johnson made 26 saves to earn the win in goal.
Regan Nichol and Cheyanne Fishley replied for the Prairie Fire (7-15-1), while Macey MacDonald made 43 stops taking the loss in net.
In the Stars 8-0 win on Sunday, Abby Shirley had a pair of goals, while Willow Slobodzian, Hollie Coumont, Grace Shirley, Girolami, Jordyn Gerlitz and Anna Leschyshyn had singles. Jordan Ivanco made 26 saves to earn her first shutout of the season in goal for Saskatoon.
Ashlyn Taillon made 51 stops to take the loss in net for the Prairie Fire.
Last season, the Stars topped the league’s regular season standings with a 25-3 record. 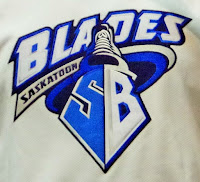 When the Saskatoon Blades want to organize something special, they definitely knock it out of the park.
On Saturday at the SaskTel Centre, the player from the Blades and the visiting Regina Pats stood shoulder to shoulder at the centre ice circle to honour four victims who were killed in a Jan. 22 shooting In La Loche. The Blades staff created a display featuring pictures of the victims Drayden Fontaine, Dayne Fontaine, Adam Wood and Marie Janvier. Six people from La Loche, whose family members were receiving medical care in Saskatoon, also took part in the pre-game ceremony.
A total of 30 people from La Loche were guests of the Blades.
The pre-game ceremony included a song of healing performed by drummer Marc Okicitow before Michelle Dubois sang O Canada. The video of the ceremony was special to see, and it can be found right here.
The pre-game tribute definitely overshadowed the fact the host Blades came away with a 7-3 victory in captain Nick Zajac’s 300th career regular season game.
The Blades will continue efforts to be a force in the community on another front during their game Tuesday against the Prince George Cougars (7 p.m., SaskTel Centre). Along with M.D. Ambulance, the local WHL club will be raising money for Grade 2 student Naomi Lendvay and her family, as young Lendvay is fighting stage four pediatric cancer. Funds will be raised through a jersey auction and the 50/50 draw.
Spectators will also receive a special hockey player card of Lendvay.
If Lendvay is feeling well enough, she will drop the puck for a pre-game ceremonial faceoff. The Blades put together a video of Lendvay’s story, and it can be found here.


If you have any comments you would like to pass along about this post, feel free to email them to stankssports@gmail.com.
Posted by Darren Steinke at 20:38