The University of Saskatchewan Huskies men’s hockey team won’t be sneaking up on anyone this time.
Entering the 2015-16 campaign, the Huskies had expectations to do well, but those expectations were tempered after posting a 10-15-3 mark in 2014-15, which ended a run of 18 straight seasons where the Dogs posted a winning record. Doubts were put to rest quickly.
The Huskies seemed to be on a magical ride in 2015-16 cruising to the top of the Canada West standings with a 22-6 mark. Their 22 wins matched a club record, which occurred in the 1999-2000 campaign with a 22-3-3 mark and in 1987-88 with a 22-5-1 record.
They played an exciting and wide open style offensively, while remaining sound in the defensive zone. Goaltending was rock solid thanks to Jordon Cooke, who won the award as the top netminder in Canadian Interuniversity Sport after posting a 19-5 record, a .921 save percentage, a 2.52 goals against average and two shutouts.
The Huskies were also pushed by an emotional spark playing to honour the memory of alumni Cody Smuk, who passed away of cancer in late June of 2015. Smuk’s number was retired before a home game on Oct. 24, 2015, and the Huskies warmed up at home all season all wearing Smuk’s #24 jersey.
In the playoffs, the Huskies swept away the U of Calgary Dinos in a best-of-three Canada West semifinal series and pulled out the broom again to take down their forever rivals the U of Alberta Golden Bears in the Canada West championship series. Both rounds were playing in front of raucous crowds at the ancient Rutherford Rink.
After taking the Canada West title, the Huskies brought out Smuk’s parents, father Marty and mother Darla, and his fiancée Stephanie Vause to be part of the on ice team picture.
It seemed like everything was lining up to create a feeling that the Huskies would win their first CIS title since 1983 no matter what the odds were.
At the University Cup in Halifax, N.S., the Huskies dropped a 2-1 triple overtime heartbreaker to the St. Francis Xavier University X-Men in a semifinal match. U of S closed the tournament falling 5-2 in the bronze medal contest to the St. Mary’s University Huskies 5-2.
Entering the 2016-17 campaign, the Huskies top the pre-season Canada West coaches’ poll. They open the regular season on Friday hosting the University of British Columbia Thunderbirds at 7 p.m. at Rutherford.
Emotion will not likely play as big of a role this time around. Captain Kendall McFaull, Connor Cox, John Lawrence and Josh Roach are the only remaining Huskies players who were teammates with Smuk in his final season in 2013-14.
They also have to make up for the loss of last season’s fifth year graduates in Zak Stebner and Matthew Spafford. Stebner was a sound defensive defenceman and a calming presence in the dressing room. Spafford brought heart and character to the squad, which made him arguably the team’s most popular play amongst the student body at the U of S campus.
The Huskies return a strong core including last year’s team scoring leader in Kohl Bauml and goals leader Levi Cable. That group will have to jell with an outstanding group of nine first-year players that made the final cuts topped by standout forwards Alex Forsberg, Connor Gay and Carson Stadnyk. If the returnees and newcomers establish chemistry early, the Huskies have the potential to be more formidable than last season.
The 2016-17 campaign will eventually write its own unique tale. The Huskies might just add another impressive chapter to their already storied history.

The U of S Huskies women’s team enter the 2016-17 campaign with new but familiar face taking over as head coach on a one-year interim basis.
Former captain Robin Ulrich will be the Huskies new top bench boss as Steve Kook takes a professional leave of absence. Ulrich played defence for the Huskies from 2004-09 and was named a Canada West first team all-star and won the conference’s student-athlete community award.
Ulrich was an assistant coach with the team the past five seasons. The last two were a little less involved than the first three due to becoming a high school physical education teacher at Lampman School.
She is extremely popular with the alumnae of the Huskies women’s team, who will no doubt be pulling for her, and she is surrounded by a strong support staff of assistant coaches.
Ulrich also comes in knowing most of the players. The Huskies still have eight holdovers from their 2013-14 Canada West championship winning team, when Ulrich was a full-time assistant coach. The vets will no doubt ease the transition for the new bench boss.
Fourth-year forward Kaitlin Willoughby tops the list of key returnees. The Prince Albert, Sask., product had an exciting summer attending Hockey Canada’s Women’s Development camp in August.
Cassidy Hendricks returns for her fifth and final season looking to add to her Huskies record for most career regular season wins, which currently sits at 46.
Veteran forwards Lauren Zary and Rachel Johnson will likely give a strong punch to the offence, while Alyssa Dobler and Kira Bannatyne will be key in anchoring the back end in the defensive zone.
Second-year defender Leah Bohlken will see an increased role as a quarterback on the power play, and former Weyburn Gold Wings captain Bailee Bourassa has the potential to chip in a few goals in her rookie campaign.
Intensity won’t likely be a problem for the Huskies on their opening weekend. They travel to Vancouver to take on the defending Canada West champion University of British Columbia Thunderbirds on Friday and Saturday. Over the past couple of seasons, the battles between the Huskies and Thunderbirds have usually gotten a bit chippy.
During the past two campaigns, offensive has come at a premium in Canada West women’s play. If the Huskies can find a groove early offensively, it might give them a bigger boost in the long run.

Back in the Express with Lukowich looking up to Howe

I was back in the Saskatoon Express this week with a story that was pretty fun to write.
I caught up with Morris Lukowich, who scored his fair share of goals playing in the NHL from 1979 to 1987. Lukowich, who grew up playing minor hockey in Saskatoon in the 1960s and early 1970s, looked up to the late Gordie Howe.
Always the great story teller, Lukowich talked about his first meeting with the hockey icon and later becoming his teammate with the Houston Aeros of the now defunct World Hockey Association.
Drafted by both the Pittsburgh Penguins of the NHL and the Aeros after starring for the WHL’s Medicine Hat Tigers, Lukowich had the chance to hang out with Howe on a recruiting trip to Houston.
That story can be found right here.

Leafs/Sens game was great for those who got there 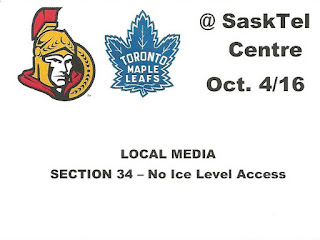 The biggest challenge of watch Tuesday night’s NHL pre-season game between the Toronto Maple Leafs and Ottawa Senators might have been just getting there.
When I went to the game, I arrived at the junction of 51st Street and Idylwyld Drive at about 6:30 p.m., and it took me 50 minutes to get from there to the SaskTel Centre. I didn’t even get to the arena’s parking lot. I parked at a used car dealership on Marquis Drive and booted it to the rink to make it inside by puck drop due to fact I was covering the game for The Canadian Press.
Upon arriving at the SaskTel Centre’s main entrance, it looked like there was only one open route into the parking lot and no cars were coming in off Bill Hunter Avenue.
The SaskTel Centre staff played damage control posting on Twitter, “Folks in traffic… our ingress plan is the same as Rush games and Garth Brooks. No specific reason for the congestion.”
After seeing that Tweet, I started to question if I saw what I really saw. I attended the last two National Lacrosse League playoff games for the Saskatchewan Rush, which were sold out, and I remember cars streaming in off Bill Hunter Avenue.
The locals that called into talk radio in Saskatoon on Wednesday morning seemed to see the same thing I did when it came to getting to the SaskTel Centre on Tuesday night.
The frustration of getting in turned out to be a minor headache due to the fact the game itself was great and way better than the NHL pre-season games that were held at the SaskTel Centre the past two years.
The Leafs and Senators iced lineups that will be close to the ones they use in the regular season. Ottawa pulled out a 3-2 victory after Bobby Ryan scored 21 seconds into overtime. Ryan scored on a nice backdoor play, while his side was working the power play. As for other thoughts on the night:

If you have any comments you would like to pass along about this post, feel free to email them to stankssports@gmail.com.
Posted by Darren Steinke at 22:38