Retiring athletic director will be missed on U of S campus

The University of Saskatchewan Huskies won’t be able to replace Basil Hughton, but they will have to do their best to fill his void likely by committee.
On Monday, the 60-year-old Hughton announced he was retiring as the Huskies athletic director effective June 30, 2017. He became the Huskies athletic director in August of 2008 after spending 30 years as a teacher and administrator in Saskatchewan’s school systems mostly with Saskatoon’s public system.
When Hughton took over as the Huskies athletic director, it was a homecoming. He played with the Huskies football team in the 1970s, received his bachelor of physical education in 1977, bachelor of education in 1978 and a master’s degree in education in 1992 all from the U of S.
Hughton returned to a Huskies program that was successful and had a great reputation on the national stage. His biggest challenge was to ensure the Huskies continued to achieve lofty goals in the classroom and in competition. Great success was achieved on both fronts.
Under Hughton, almost 1,300 student-athletes were named to national or school all-academic teams. In competition, the Huskies won 15 Canada West championships and two national titles in the league now referred to as U Sports.
One of those national championships came from the Huskies men’s basketball team in 2010 and the other from the Huskies women’s basketball team last March. Both were program firsts.
All these achievements came from the fact that Hughton created a positive feeling environment.
Traditionally, athletic directors are viewed as authority figures. If you as an athlete had to visit one, you would stereotypically think you had done something wrong.
Hughton was more like a kind second father. When you meet him, it doesn’t take long to realize he has a genuine sense of caring about the athletes in the Huskies program. He makes it a point to get to know everyone that plays for a Huskies team on some level.
While a rookie athlete may have a good first impression about the U of S due to the recruiting efforts of a coach, the first meeting with Hughton is one of those welcome to the family type moments. You can feel there is an emotional investment and a hope that you will do well.
That in itself is big, when you consider the majority of Huskie athletes are living away from home for the first time relocating to Saskatoon from some other town or city. Those athletes are taking their first steps in life as young adults, and it feels reassuring the top person in the athletics program cares that you do well.
If an athlete needs to talk about something but doesn’t feel like telling a coach, Hughton’s door is always open.
Right now, it is harder to be an athlete at the university level in Canada than it ever has before. An athletes’ time is stretched to the maximum due to commitments with academic studies, year round training, at times a job and maybe even a romantic relationship.
When a Huskies athlete deals with ups and downs on all these fronts, it is nice to know Hughton is around to provide a friendly and positive presence which gives off a sense of stability.
If you want to see the lengths Hughton will go to help the Huskies program, all you have to do is turn up on a Saturday morning at the U of S campus after a heavy snowfall. He will be out there shoveling away snow from the front of the Physical Activity Complex and the Rutherford Rink.
If you’re a Huskies athlete and you see that, you have to be thinking if my athletic director is going to go out and do that I really need to bring it tonight.
For me, the time it really struck me how much Hughton cares came from what I think was supposed to be a private moment. About a couple of days after Huskies men’s hockey team gritty, glue guy forward Cody Smuk passed away in June of 2015 due to cancer, I stopped to checked out the Smuk mural that was painted at the entrance of the Rutherford Rink on an early Saturday morning.
I was alone only for a couple of minutes when Hughton pulled up. We talked for a few minutes, and it was visible he was in a moment where he was taking Smuk’s passing pretty hard. Hughton was working through his healing process dealing with the death of a member of his Huskies family.
We both signed the mural and went on with the rest of our respective days. I came away thinking the Huskies were pretty fortunate to have Hughton as their athletic director.
Still, Hughton’s time as the athletic director isn’t over yet.
Last season, the Huskies had an extremely memorable campaign capturing four Canada West championships coming from men’s track and field, men’s wrestling, men’s hockey and women’s basketball. The women’s basketball team also won their national title.
Hughton gets to go through one last winter semester, and maybe a couple more conference champions or even national championships might be around the corner. That would be the ultimate capper for a send off. 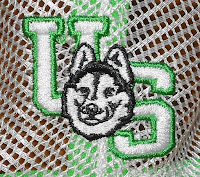 The U of Saskatchewan Huskies continued to showcase the big donors for the Home Ice Campaign, and the two that took centre stage on Thursday have been long-time friends of the athletic program.
During a presentation at the Physical Activity Complex, alums Ron and Jane Graham gave a gift of $4-million to support the construction of two basketball practice courts at Merlis Belsher Place. The donation will also fund locker rooms and team rooms for the Huskies basketball teams and give the university flexibility to consider developing an athletic research area in the new space.
With this gift, the Grahams also became the largest cumulative alumni donors to the university in its history contributing close to $20-million. In their honour, the main court at the PAC will be named Ron and Jane Graham Centre Court.
In the past, the Grahams have supported the expansion of the Graham Huskie clubhouse at Griffiths Stadium and the establishment of the Ron and Jane Graham School of Professional Development in the College of Engineering.
The planned Merlis Belsher Place will be best known as a twin pad ice rink facility that will be the new home for the Huskies hockey teams and provide additional ice time for Saskatoon Minor Hockey and the community.
The university is seeking the help of the community to raise the remaining $7-million towards the facility that will cost $41-million to build.


If you have any comments you would like to pass on about this post, feel free to email them to stankssports@gmail.com.
Posted by Darren Steinke at 21:52