Durant will always be a Roughriders hero

Darian Durant will always be a Saskatchewan Roughriders hero, and “green was his colour” when he announced his retirement from football on Friday.

The 35-year-old was signed to be the backup quarterback for the Winnipeg Blue Bombers for the upcoming campaign, when he elected to hang up his cleats.
During his first 11 of 12 seasons in the league, he starred with the Saskatchewan Roughriders being part of their 2007 Grey Cup winning team as a backup and quarterbacking “the green and white” to a title at Taylor Field in 2013.
Sandwiched in between those games were two heartbreaking Grey Cup losses he started in 2009 and 2010.
The Florence, South Carolina, product announced his retirement on his website, and he wrote in one part of his message, “If you cut me open, I am sure that I would bleed green. Saskatchewan and Regina will always be home.”
The veteran signal caller was traded by the Roughriders to the Montreal Alouettes in January of 2017 and signed a three-year contract with that team. Last season in what is now his final campaign in the CFL, Durant, who stands 5-foot-11 and weighs 214 pounds, played in 15 games for the Alouettes completing 274-of-417 passes for 3,233 yards, 15 touchdowns and 16 interceptions.
Montreal finished last in the entire CFL with a 3-15 record and missed the playoffs for the third straight campaign.
On Jan. 15, the Alouettes released Durant just one day before he was to have received a $150,000 signing bonus from the team.
On Jan. 20, Durant signed a one-year contract to join the Bombers.
He likely got cold feet when it came to moving to Winnipeg. Durant said he had opportunities away from the field that would allow him to transition to life after playing the game and that he didn’t want to be away from his daughter, who was born earlier this year.
During his 12 seasons, Durant completed 2,500 out of 4001 passes for 31,740 yards, 167 touchdown passes and 115 interceptions.
In the process of how his departure went down, Durant managed to add gasoline to the fire in the rivalry between the Roughriders and Bombers.
Shortly after Durant’s retirement announcement, Bombers general manager Kyle Walters released a statement where he said, “Ultimately, Darian has not informed the team of his decision, but we were notified through social media this morning that he has decided to retire from professional football. While we respect his decision, we are of course extremely disappointed.”
It then came to the surface that the Bombers had paid Durant a $70,000 signing bonus that he plans to keep.
Durant spoke with Roughriders play-by-play voice Rod Pedersen and Luc Mullinder on 620 CKRM’s SportsCage on Friday and said his agent has been in contact with Walters the past three to four weeks about a possible retirement. As for the bonus, Durant said he felt like it was a situation where he felt he deserved it and was going to leave it at that.
With all those developments, the Roughriders fans and the media in Saskatchewan were praising and congratulation Durant on a great career. A large group of vocal fans in Winnipeg painted Durant as a villain for abandoning the Bombers, and that tone was reflected in some of the reports coming from the media in that centre.
Considering the fact CFL player contracts are not guaranteed and teams often cut players before they are due bonuses to help navigate the salary cap, I am fine with Durant keeping his bonus from the Bombers. That is part of the business of the CFL.
Playing for the Roughriders from 2006 to 2016, Durant cemented himself as one of the team’s legends, and he will go down at the moment as the second best quarterback in team history after Ron Lancaster.
Way back on July 12, 2008, Durant made his first start with the Roughriders and threw them to a thrilling 33-28 road victory over the Tiger-Cats in Hamilton. From 2009 to 2014, he was part of a core group of players that powered Saskatchewan to success year after year including Weston Dressler, John Chick, Chris Getzlaf, Rob Bagg, Mike McCullough and Neal Hughes.
Other key figures that passed through the Roughriders during Durant’s era included Gene Makowsky, Ben Heenan, Ty Brackenridge, Andy Fantuz, Tristan Jackson, Eddie Davis, Lance Frazier and Ricky Foley.
With the Roughriders, Durant sits second in team history for career pass attempts (3,584), completions (2,226), yards (28,507) and touchdown passes (152).
Durant’s legacy is more than just numbers. Being the starting quarterback of the Roughriders might be the hardest job in the CFL due to intense fan scrutiny, and Durant exceled at it. He became a fan favourite despite still having a few vocal detractors.
In his retirement announcement, Durant said he named his daughter Amayah Taylor after Taylor Field. He said he wants to launch a foundation to raise funds to give back to the community.
During his time with the Roughriders, Durant became one of Saskatchewan’s own, and it is pretty obvious he will hold those ties close to his heart.

The members of the cut University of Regina Cougars men’s and women’s wrestling teams and men’s volleyball team keep looking more and more respectable and classy in their fight to bring their programs back.
The three teams were axed by the U of R without warning on April 30. On Saturday, the wrestlers held an open community practice at the First Nations University Regina Campus. By the looks of the video on the “Save U of R Wrestling team” Facebook page, the organizers had a decent turnout.
In one of the posts leading up to Saturday’s practice, a note was posted that Harold Riemer, the U of R dean of the Faculty of Kinesiology and Health Studies, was going to made a short appearance at the beginning of the practice and asked that he be shown respect.
On Friday, Global News in Regina produced a story off a confidential recording of a meeting between Riemer and members of the U of R women’s wrestling team.
That story reported that in 2016-17 campaign the administration in the athletic department was told they needed to raise $580,000 in fundraising and fell about $220,000 short. During that fiscal year, Riemer said in the Global story the U of R athletics department had expenses totally $3.1-million and with $2.7-million coming in to support the department, there was a deficit of $400,000.
Out of the $2.7-million brought in to support athletics, $2.3-million comes from the recreation and athletics fee that is charged to students and is split between the universities teams and other recreation programs. The athletic teams only collected $445,000 in gate revenue, sponsorships and Sask. Sport Inc.
Riemer said the U of R didn’t want to rely on fundraising to operate the teams. Likely that comes from the feeling that universities like to have oversight on anything the institution’s name is attached to.
With that said, I hope the hierarchy at the U of R would be open to the prospects of fundraising. If it is possible to raise the money to help operate the cut programs, that should be looked at. If in theory an alum wanted to donate a big sum of money to get a cut team back in action, I believe that should be looked at.
I am also aware that U Sports programs across Canada face difficult fiscal challenges. It is pretty obvious there are fiscal fears at the U of R. 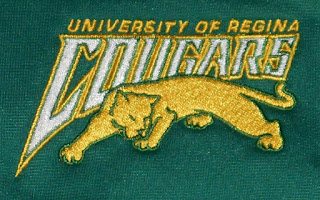 Even with a high profile sport in the media like football, U Sports doesn’t carry the lustre it once did. Wrestling traditionally always had a more quiet profile in the media.
Unless a controversy exists, the less than a skeleton crew mainstream media in Canada often ignores U Sports.
If you see the rising price of gas, it is likely the country will be in a recession again soon due to everything else going up in price, which will make it that much harder to get sponsorships or fundraise for teams.
Still, I believe on the wrestling side you would be able to gather enough alums who would rally to keep those two squads going.
The Cougars men’s team has won 10 Canada West Conference championships, with the first coming in 1989 and the last in 2012, and two U Sports national titles in 1997 and 1998. They finished second in the team standings at nationals four times and placed third four times.
Women’s wrestling became an official sport in U Sports in 1998-99, and the Cougars women’s team has finished second twice in the team standing at U Sports nationals.
Both the men’s and women’s teams have had numerous individual conference and national champions.
You won’t be able to bury the history of wrestling at the U of R. Looking at the U of R’s Sports Hall of Fame, the 1997-98 national champion Cougars men’s wrestling team still needs to be enshrined.
On an individual basis, legendary head coach Leo McGee, four-time individual U Sports national champion Ali Bernard and Lease Bertram, who was the male athlete of the year for U of R in 1997-98 and a former member of Canada’s national team system, all should enter the U of R Sports Hall of Fame too.
There are a large number of other individuals who should likely be enshrined too.
If the wrestling teams aren’t brought back, talk of bringing back those squads will come up when any wrestling Hall of Fame enshrinements happens.
The athletes have put on a passionate and respectful fight to bring back their programs and demonstrated great leadership in doing so. Here is hoping they keep pushing forward and the community in Regina enables them to reach their full potential in athletics and academics.

If you have any comments you would like to pass along about this post, feel free to email them to stankssports@gmail.com.
-------
If you like what you see here, you might want to donate to the cause to keep independent media like this blog going. Should you choose to help out, feel free to click on the DONATE button in the upper right corner. Thank you for stopping in.
Posted by Darren Steinke at 23:53