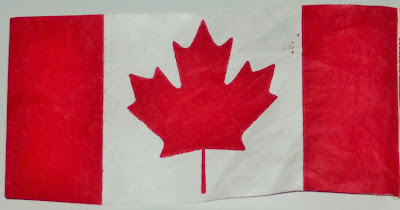 During events like Olympic gold medal hockey games, the Canadian flag is a proud symbol that unifies a nation.
If you look closely into the white space between the red bars, it is also said you can visualize two faces getting ready to have an argument or a fight.
As the current lengthy Canadian federal election moves along, the latter observation might be the accurate way to interpret the land that is viewed as the “True, North, Strong and Free.”
While there has been a lot of recent concern about apathy regarding politics in Canada, those that are involved or interested in how the country’s government work are passionate about their views. Unfortunately these days, it seems like that passion is almost taken to the extremes.
It feels like if you have friends on the left wing of the political spectrum that it is frowned upon to friends on the right wing and vice versa. Things really become polarizing when you mention the name of Prime Minister Stephen Harper and his Conservative party, which have formed the government since first being elected in 2006.
Now, I admit I am far from a political animal. I feel way more comfortable analyzing the happenings in the sports world specifically when it comes to hockey and football. I am a bit out of my element in the political world, but I feel I am educated enough to offer an opinion.
In talking to friends and acquaintances who have vested interests or follow politics, it feels Canada in the present is sharply divided into two factions. There are those that like Harper and the Conservatives and those that don’t. Those that support Harper and the Conservatives and those that don’t are deeply hardened in their positions.
I also get the feeling those friends and acquaintances are so hardened in their positions that there is no room for friends on the other side. It seems that those that support Harper and the Conservatives view anybody that is on the other side as the enemy, and similarly, those that don’t support Harper and the Conservatives also view anybody on the other side as the enemy.
Early in this 78-day campaign, it seems emotions haven’t run too high, but I fear that could and will likely change near the end of the campaign.
Growing up, I remember often hearing the cliché that the two worst things to talk about in a big gathering of people were politics and religion, because those subjects cause emotions to run high. That cliché was further reinforced in my late teens, when I saw my late father, who mainly supported Conservative and right wing parties in his life, get extremely upset at a big family gathering at certain individuals that wouldn’t follow his line of thinking.
In the current day, it seems like there is a sizable minority in Canada that are so vested in their respective political sides that I could envisions emotions boiling to the point at the end of the election that situations will occur where friends and family members will choose not to talk to each other for a lengthy period.
By tradition, the democratic society in Canada encourages debate, but in practice, it doesn’t feel debate is followed. When it comes to politics, it is more of a case that two people on opposite sides get in an argument, take things at a personal level and depart in disgust. There doesn’t seem to be a mutual respect.
Since I turned the eligible age to vote, a total of six federal elections have been held in Canada. Over the course of those elections, I have been one of those swing voters who has casted ballots for the Conservatives, Liberals and the New Democratic Party. I mainly voted on who I felt by conscience would form the best government.
To the dismay of my left wing friends, that included voting for Harper and the Conservatives at one time. To the dismay of my right wing friends, I won’t be voting for Harper and the Conservatives this time around.
With that said, I do not want to say who you all should vote for. When you step into that ballot box way down the road on Oct. 19, you have to do what your conscious dictates.
Unfortunately when Oct. 20 rolls around, I can see Canada that is more divided than ever on the right versus left divide. I hope I am wrong.
I would like to believe that every political party honestly believes they are doing what they think is best for the country. In the modern era, that belief is something that is tough to hold on to, as the perception exists that politicians are in that game for their own self-interests and to funnel money to their friends. That likely adds to the voter apathy that is present in most elections.
It would be great if some great unimaginable event could occur to restore faith in the electoral system, but I think that likely won’t occur any time soon.


If you have any comments about this blog post, feel free to email them to stankssports@gmail.com.
Posted by Darren Steinke at 17:28