Oh what a Rush

If you live in Saskatoon, it almost seems impossible to escape the hype surrounding the Saskatchewan Rush.
On Friday, the province’s National Lacrosse League team opens its much anticipated home schedule hosting the Vancouver Stealth at 7:30 p.m. at the SaskTel Centre. That SaskTel Centre will be the place to be on Friday night. The anticipation level was upped a few notches when the Rush posted a thrilling 10-8 comeback victory over the Roughnecks in Calgary on Jan. 2.
The Rush enter the current NLL campaign as defending league champions having won the Champion’s Cup last season in Edmonton. After spending 10 seasons in the Alberta capital, the Rush were forced to relocate after they were unable to secure a home venue.
As the NLL is a well-established league, people in Saskatoon have been jumping on the bandwagon to support a club that has the makings to be a league power for some time. After the club opened its business office on 2nd Avenue South across from Midtown Plaza, more and more residents have been spotted around “The Bridge City” sporting Rush gear. The excitement over the team is also trickling throughout the province.
After seeing their season opener broadcast on TSN, it looks like the Rush will be a whole lot of fun to watch. It really seems like the hype is warranted.
Actually, the Rush has a huge opportunity to really build a fan base rapidly in Saskatchewan. Out of the club’s 18 regular season games, it is possible to view 13 of them, if you attend all nine home games and the four road contests that are shown on TSN. If the Rush repeat their accomplishments of a season ago, their players will become household names.
If all goes well, TSN might be showing post-season games from the SaskTel Centre.
For now, feel free to enjoy the fact that the hype is likely very real. Allow yourself to enjoy the Rush.

While the Rush have a lot of hype, a well-established local team that dates back to 1910 is having a pretty good season to say the least.
The University of Saskatchewan Huskies men’s hockey team has been Saskatoon’s most exciting hockey club this season, and the Dogs have reclaimed a spot as one of the premier teams in Canadian Interuniversity Sport. After posting an uncharacteristic 10-15-3 last season, the Huskies top the Canada West standings with a 15-3 mark so far this season.
With an infusion of a number of talented young forwards, the Huskies have returned to playing a real up tempo style this season that has been fun to watch. Everyone has been chipping in too, as 10 players have 10 or more points so far in the current campaign.
The dynamic rookie line of Kohl Bauml, Levi Cable and Andrew Johnson are first, second and third respectively in team scoring. Bauml has five goals and 13 assists, Cable 11 goals and five helpers and Johnson has popped home eight goals and seven assists.
Defence was a strong spot for the Huskies last season, and that hasn’t changed with a veteran group including Zak Stebner, Kendall McFaull, Connor Cox, Jordan Fransoo and Jesse Forsberg leading the way.
Sophomore goalie Jordon Cooke, who is a graduate of the Western Hockey League’s Kelowna Rockets, has been spectacular recording a 13-3 record, a 2.43 goals against average, a .926 save percentage and one shutout. He has shown the ability to steal games, which helped him be named the Canadian Hockey League’s goalie of the year back in 2014.
Cooke has been overlooked for a serious professional shot due to the fact he stands only 5-foot-10, but there is no denying he has professional level talent.
The Huskies host the University of Calgary Dinos (7-8-3) on both Friday and Saturday night at 7 p.m. at the ancient Rutherford Rink. If you haven’t seen the Huskies men’s team play in a while, now would definitely be a good time to check out a game and get reacquainted with the team.

Releases of Dressler and Chick tough to swallow 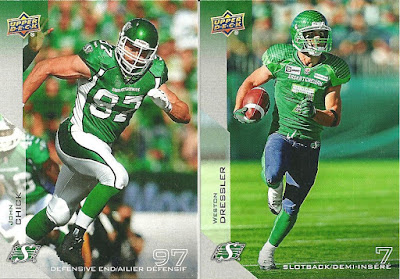 Saskatchewan residents received a reminder of how cruel the business of professional sports can be.
On Thursday, the CFL’s Saskatchewan Roughriders released beloved veterans John Chick and Weston Dressler, which caused immediate shock and dismay among “Rider Nation.” The move was made to give the club’s new management group - led by new head coach and general manager Chris Jones - more room to work with under the salary cap.
The moves caused the Roughriders to be the province’s biggest sporting news story on a cold day on Jan. 14. Actually, it is quite common for the Roughriders to be the biggest sports newsmakers on any given winter day.
Chick and Dressler are two of the team’s biggest stars, who have been long established as premier players in the CFL. What makes their respective releases that much more tough to swallow is the fact they have been entrenched in the province’s community since joining the “Green and White.”
Both are the perfect examples of players you want representing your team in the community. They are personable and friendly guys who are very approachable. While they are not from Saskatchewan originally, they are basically viewed as neighbours.
Their release is almost the equivalent of watching a close family member go work in a country far away.
Roughriders fans have experienced this same gut punches in the past, when the team released other popular stars that had reputations just like Chick’s and Dressler’s like Don Narcisse, Bobby Jurasin and Dan Farthing. All of those departures were emotionally hard to take. Unfortunately, that is the dark side of professional sports.
With that in mind, Chick was a key part of the Grey Cup championship teams in 2007 and 2013, and Dressler also earned a Grey Cup ring in 2013. Both will be future member of the Canadian Football Hall of Fame, and they will always be Roughriders legends.

One of my big recent thrills was getting the opportunity to write a long feature story Canadian blind golf champion Gerry Nelson for the Saskatoon Express.
The 52-year-old Saskatoon resident lost his sight due to complications from diabetes at the age of 25. From that huge setback, Nelson built as storied career as a blind golfer.
When you get the chance to sit down and visit with Nelson, he can captivate you with the vast amount of stories he can tell like the late great iconic CFL head coach and general manager Cal Murphy could.
Nelson can often be found at the SaskTel Centre as a regular in the crowd at Saskatoon Blades WHL games along with his 12-year-old son Wyatt Nelson-Zook. Wyatt gives his father the play-by-play of the contest.
Gerry Nelson’s amazing story can be found right here.


If you have any comments you would like to pass along about this post, feel free to email them to stankssports@gmail.com.
Posted by Darren Steinke at 20:47